Lecture by Vitaliy Portnikov will take place in Vinnytsia within the framework of the project “Fourth Power: Impact, Challenges, Responsibility” 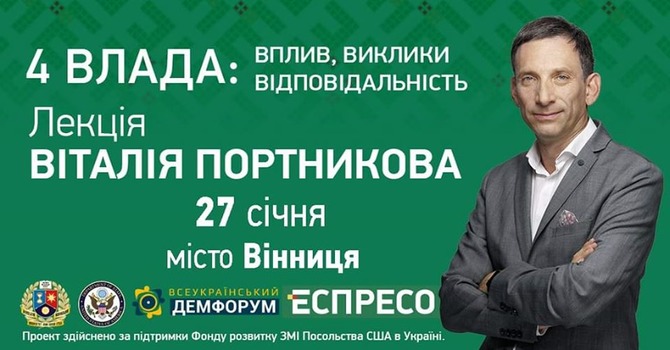 On Tuesday, January 27, a lecture by Vitaliy Portnikov will be held at the Donetsk National University named after Vasyl Stus within the framework of the project “Fourth Power: Impact, Challenges, Responsibility”

Vitaly Portnikov's lectures in the framework of this project have already taken place in Odessa, Ostroh, Kharkiv and Dnipro. And on Tuesday, January 27, at 2.30 pm, we are waiting for you for the fifth lecture of Vitaliy Portnikov, "The Fourth Power: Influence, Challenges, Responsibility" at the address Vinnytsia, 600-th Anniversary, 21, in the assembly hall, which is on the 7th floor.

The lecture will be moderated by Professor Serhiy Bondarenko, Acting Director, Head of the Vasyl Stus Department of Journalism at DonNU. Organizer of the event - NGO "All-Ukrainian Forum for Democracy", with the support of the Media Development Fund of the US Embassy in Ukraine, the organizing partner - Donetsk National University named after Vasyl Stus, media partner of the event - Espreso channel.