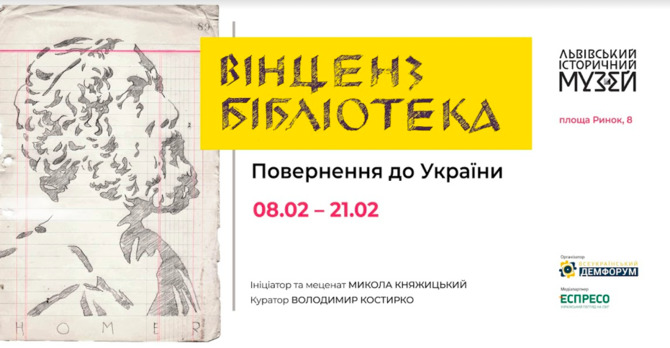 An exhibition of unique books from the writer's private collection "Vincenz. Library" will open in Lviv. The collection returned to Ukraine through the efforts of patron Mykola Knyazhytsky.

On Monday, February 8 at 16:00 in the Lviv Historical Museum (Italian courtyard) will be the opening of the exhibition "Vincenz. Library", dedicated to the outstanding personality, Polish writer and philosopher Stanisław Vincenz.

The private library of Homer's Hutsul Region has returned to Ukraine with the assistance of People's Deputy Mykola Kniazhytsky.

The exposition of the exhibition will consist of almost 1000 rare books. Among them are unique editions of Homer, Dante, Shakespeare, Plato. As well as copies with autographs and dedications of contemporaries and friends of the writer - Jerzy Giedroyć, Czesław Miłosz, Józef Czapski, Gustaw Herling-Grudziński, numerous French, German and American intellectuals.

The Vincenz Library was purchased in Germany.

"Vincenz will not just return to Lviv - he will return to the city center, because people will be able to look at his library right on Rynok Square, entering the Italian courtyard in Kornyakt's house, going upstairs to a beautiful majestic hall with windows of the city Left. And later the Vincenzo Library will be available for students and researchers from all over the world, because it will be open for review, for work, for study in the best Ukrainian higher education institution - the Ukrainian Catholic University."

The exhibition will be presented to a wide audience at the Lviv Historical Museum from 8 to 21 February. After that, the books will be deposited in the information and cultural center. Metropolitan Andrei Sheptytsky of the Ukrainian Catholic University in Lviv.

The initiator and patron of the exhibition is Mykola Kniazhytskyi, People's Deputy of Ukraine.

The author of the exhibition is a well-known Ukrainian artist and art critic Vlodko Kostyrko.