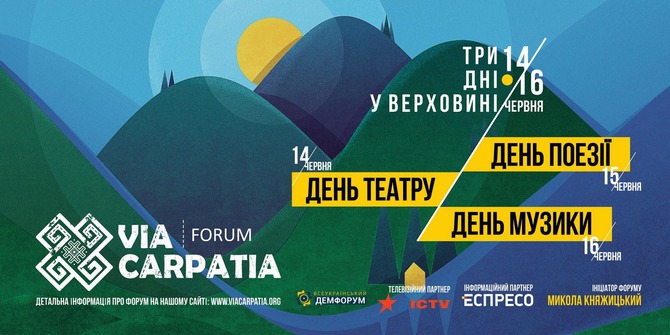 The initiator of the Forum - the Chairman of the Committee on Culture and Spirituality Mykola Knyazytskyi - spoke on the scientific and practical conference "Circle of Vincenz", which will take place within the framework of the 2nd Forum of Central and Eastern Europe "VIA CARPATIA 2019".

"This year we will hold the forum "VIA CARPATIA 2019" for the second time in places that Ukrainian writers of humanities called the Ukrainian Athens at the end of the 19th and early 20th centuries. It is very important for us to revive Ukrainian Carpathians and Hutsulshchyna. These places are known all over the world, but are now experiencing difficult economic times. Our task is to draw attention to the problems of the Carpathians and those people who live in the mountains",

Knyazhitsky also said that the conference "Circle of Vincenz" this year is devoted to the thirtieth anniversary of the fall of the Berlin Wall. The forum will be attended by public-political figures from Europe, Ukrainian high-ranking officials, politicians and members of the Cabinet of Ministers. Participants of the conference will discuss issues of ecology, conservation of the Carpathians, and the development of cross-border cooperation in the Carpathian region.

Also, within the framework of the Second Forum of Central and Eastern Europe "VIA CARPATIA 2019", a number of artistic events will be held in the Carpathian Mountains. A member of the Forum, a writer, a publisher, a winner of the Shevchenko Prize, told about them - Ivan Malkovich. For example, this year's program will feature the Musical "Gutsulka Ksenia" directed by Rostislav Derzhipilsky, the presentation of books by Vitaly Pornikov, Ivan Malkovich, Yuri Andrukhovych, Sergei Zhadan, Vasyl Zhdankin, concerts by Solomia Chubai, Jalapita, Roccoco, Lamentations of Jeremiah and "Carbido", as well as the concert and symphony orchestra "INSO-Lviv". Also, the traditional Hutsul festival "Poloninske Lito" will take place within the framework of the forum. On the last day of the Festival there will be a concert - the premiere of the Symphony Suite "The Holy Carol" performed by the INSO-Lviv Academic Orchestra, composer Ivan Nebeshny.

The idea of the Second Forum of Central and Eastern Europe "VIA CARPATIA 2019" is to revive the summer cultural Ukrainian capital - Verkhovinschina in Ivano-Frankivsk region. The forum is intended not only to reveal the diversity of the Carpathian culture, but also to gather the intellectual leaders of Eastern and Central Europe, as Ukraine is one of the countries that has signed the Carpathian Convention. A document that unites the Czech Republic, Slovakia, Hungary, Romania, Poland, Serbia.

The initiator of the Forum is Mykola Knyazhitsky, People's Deputy of Ukraine, Chairman of the Committee on Culture and Spirituality.

The organizer of the Forum is the All-Ukrainian Forum for Democracy.