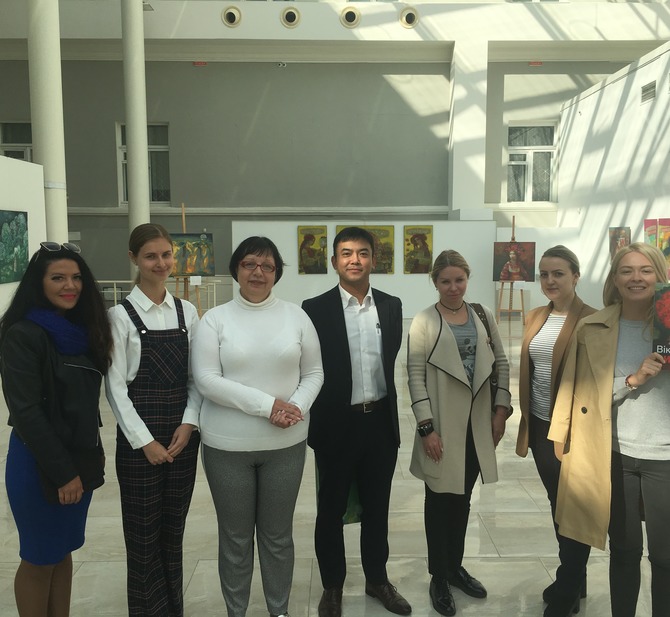 In preparation for the exhibition, working meetings between representatives of Ferrexpo and NGO All-Ukrainian Forum for Democracy were held with representatives of the National Museum of Taras Shevchenko and the Embassy of Japan in Ukraine.

During the meeting with the representatives of the museum the concept of the exhibition and organizational moments were discussed. The subjects of the works that will be exhibited are the people in the nuclear accident tragedy.

During the meeting with representatives of the Embassy of Japan: Mr. Hoshino Yuichi, Second Secretary, and Yaroshik Kirill, staff member of the cultural department, agreed on further support of the Embassy of Japan in Ukraine, and also discussed the importance of international relations and support of culture and cultural figures not only in Ukraine, but also and generally in the world. During the meeting, Mr. Masahiro Watanabe, a representative of Japan's Ferrexpo office, said that Ukraine and Japan had experienced similar disasters in their time, so it is important to make this exhibition and show the Ukrainian audience a view of foreign figures, which will promote the integration of the two cultures.

It should be reminded that the exhibition of the artist's works, which will be dedicated to the anniversary of the Chernobyl disaster, is planned for the end of April 2020.

Also, during the exhibition, workshops will be held for anyone interested in the techniques used by Noriko Yanagisova. They will be of interest to everyone, not only the artist, but also to connoisseurs of interesting techniques, because Ms. Noriko's representative works are copper-plastic prints, paintings drawn using Chinese ink, charcoal, stone pigment, combined in collage and more.

We inform that the exhibition will be held at the National Museum of Taras Shevchenko at the end of April and will continue until the end of May 2020.