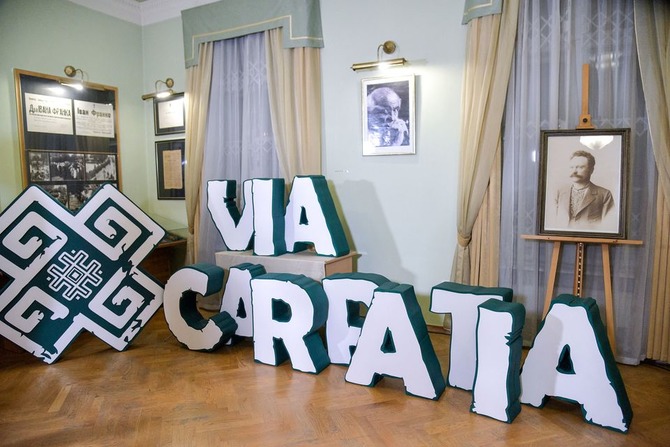 The forum "Via Carpatia 2020. Places of Ukrainian power" was a success, we can finally say that. Discussion panels were broadcast live on the Espresso TV channel and a number of events took place in various locations in the city.

Discussions focused on the formation and development of institutions in Ukraine, technological solutions and copyright in the field of culture and Ukrainian places of power. The forum ended with a panel organized by the Ukrainian PEN, "What gives us strength?".

All discussions were broadcast on Facebook and are available at facebook.com/VIACARPATIAforum in the record.

"Via Carpatia always takes place in Verkhovyna in Ivano-Frankivsk region, but since there is a quarantine in the region for a long time, we could not hold it there this year. At first, we hesitated whether to hold a forum at all, but decided to move it to Lviv and hold it partially live. And we were right! People are very thirsty for live intellectual discussion, even if it takes place in a TV studio - it's a special atmosphere, a high degree of tension. Well-known politicians, public figures, journalists, and writers spoke about Ukrainian places of power, and the studio itself became the place where intellectual power was created. By the way, the new Espresso studio in Lviv started working on the broadcast of panel discussions Via Carpatia",

The offline events were held in cooperation with the Ukrainian PEN. Writers from PEN presented books for children - Ivan Andrusyak and artist Maria Savko, and for adults - a collection of essays "Bridges instead of walls. What unites Ukrainians?”.

The central event of the forum was the awarding of the Stanislav Vincenz Award "For Humanistic Service and Contribution to the Development of Regions". The third winner of the award was Leonid Finberg, director of the Center for the Study of the History and Culture of Eastern European Jewry and editor-in-chief of the publishing house "Dukh i Litera".

Thank you Ukrainian Book Institute, espreso.tv, PEN Ukraine, Franko House, Lviv Regional Library for Youth, Roman Ivanychuk, INSO-Lviv - without you this forum would not be so rich and inspiring, or would not have taken place at all.