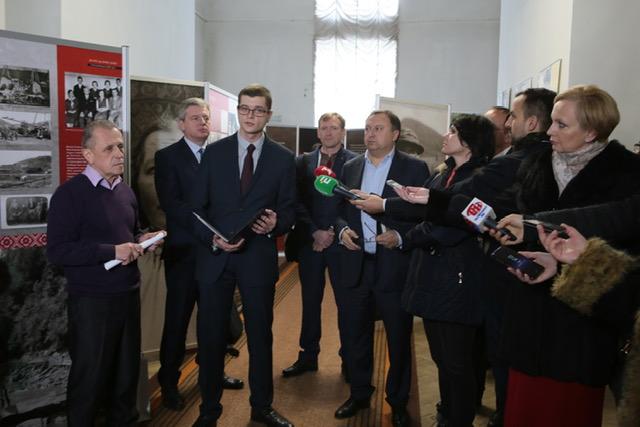 This was admitted on Monday, December 3, by the chairman of Culture and Spirituality Committee People's Deputy Mykola Knyazytsky during Ivano-Frankivsk exhibition opening "Dialogue on Fate and Soul" devoted to Polish philosopher Stanislav Vincenz.

According to Culture and Spirituality Committee chairman, the commemoration of such people who propagated peace among all peoples defended freedom both Poland and Ukraine, and sought ways of understanding between these peoples - is especially important at present times.

"Vincenz is really an outstanding figure, not only because he was able to look at the Hutsulshchyna with an understanding and insight into the region. This is a person who is needed today, particularly in Ukrainian-Polish relations, because we must look for those figures who unite us, open our eyes to understanding and each other's vulnerability",

Tomas Koval, a consul of the Republic of Poland in Lviv, emphasized that Vincenz adhered to the ideas of tolerance, coexistence and cooperation of people of different nations, cultures and confessions.

We remind that the exhibition "Dialogue on Fate and Soul". Stanislav Vincenz (1888-1971)" was presented in Poland in 2014. It is dedicated to the outstanding writer, philosopher of Polish origin, the Righteous among the Peoples of the World, the author of the book "Na vysokii polonyni" - the only epic about Hutsulshchyna.

The exposition is a biographical narrative of Stanislav Vincenz on the background of the landscapes of the Carpathians and Hutsulshchyna. The “Dialogue on fate and soul was created on the basis of documents and photographs from the family archives of Vincenz family and the museums and libraries of Poland, Switzerland, France, and the United Kingdom.

For the first time, Ukrainian version of the exhibition "Dialogue on Fate and Soul. Stanislav Vintsens (1888-1971)" was demonstrated at the Verkhovna Rada on November 6 this year.

After the presentation in Ukrainian Parliament, the exhibition travels Ukraine from Kyiv to the village of Kryvorivnya, Verkhovyna district, Ivano-Frankivsk region. In Krivorivnya, the capital of Hutsulshchyna, it will be exhibited on an ongoing basis.

In Ukraine the initiator of this exhibition demonstration is Mykola Knyazhitsky, the chairman of Culture and Spirituality Committee People's Deputy.

From the Ukrainian side, the event was organized by the NGO "All-Ukrainian forum for democracy", from Poland - the Institute of Polish Philology and the University of Wroclaw.

The exhibition in Ivano-Frankivsk will last for two weeks from December 4th, with the support of the regional state administration and local lore museum.