Myroslav Marynovych received a prize the name of Stanislav Vincenz 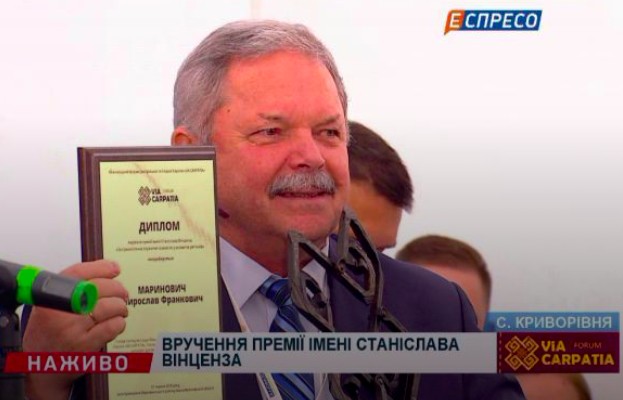 Myroslav Marinovich, a Ukrainian dissident, and vice-rector of the Ukrainian Catholic University, became a laureate of the Stanislav Vincenz Prize for humanitarian service in the development of the regions.

At the solemn closing ceremony of the First International Conference "Circle of Vincenz: The Future of the Carpathians", within the framework of the International Forum of Central and Eastern Europe Via Carpatia, the award of the Stanislav Vincenz Prize for the Humanitarian Service for the Development of the Regions was held.

The prize is annually awarded to representatives of local self-government, public organizations and opinion leaders in various dimensions of public life. The organizers assure that the nominees of the prize establish high humanistic ideals, enrich the historical memory of the people, its national consciousness and identity and serve as an example of high moral and professional qualities.

The winner of the Stanislav Vincenz Prize for Humanitarian Service for the Development of the Regions in 2018 became my founder member of the Ukrainian Helsink Group, organizer of the amnesty movement in Ukraine, and Vice-Rector of the Ukrainian Catholic University in Lviv Miroslav Marinovich.

"I was moved, because for me Kryvorivnya is known from the very youth as a place where the world's representatives of Ukraine arrived. I never dreamed that this is where I will be awarded with the Stanislav Vincenz prize. I am very grateful for this award! Stanislav Vincenz is a symbol of his own work for the humanitarian service of the regions, love for his native land and his little homeland, which is what we all wanted to revive ",