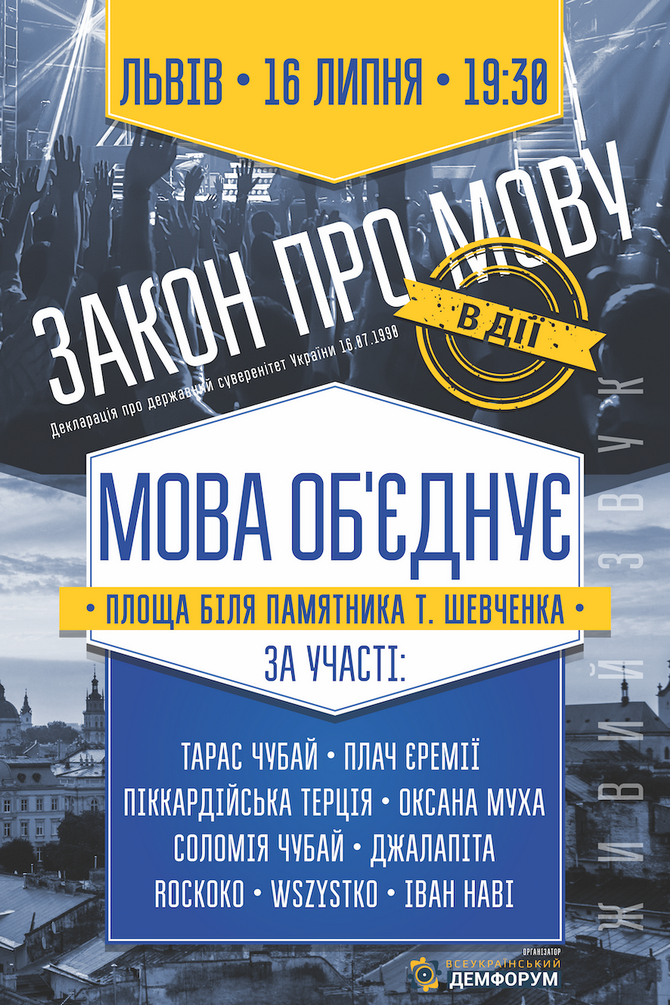 On July 16, 2019, the Law of Ukraine “On Ensuring the Functioning of the Ukrainian Language as State” came into force and was adopted by the Verkhovna Rada on April 25, 2019. On this occasion in Kiev, Kharkiv, Lviv, Dnipro, Vinnytsia, Zhytomyr, Odesa, Mariupol and many other cities of Ukraine will be held an all-Ukrainian action called "Language unites."

The event aims to show our opponents from the aggressor country and other countries that Ukrainians are able to defend their language. Famous Ukrainian performers, writers, poets, and public figures will take to the stages of 30 cities of the country to reaffirm the importance of the law and its historical significance.

The main scene of the action "Language unites" will be located in Lviv on the square near the monument to Shevchenko. The organizer of the concert is the NGO "All-Ukrainian Forum for Democracy". The event will start at 7:30 pm and continue until 11:00 pm. Famous artists of Ukraine and abroad will take part in it: Taras Chubay and the band "Crying of Jeremiah", Vocal formation "Piccardian Tertia", Oksana Muha, Maria Burmaka, Solomiya Chubai with bands "Jalapita" and "Rockoko", Ivan Navi, band "WSZYSTKO".

The event will be televised by three national TV channels: Channel 5, Pryamyy, Espreso.