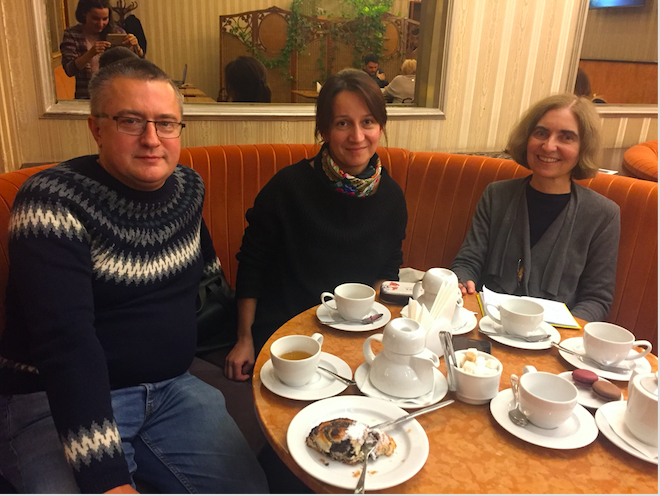 In the capital there was a working meeting of screenwriters of the future full-length feature film "Vincenz".

The meeting of Natalia Vorozhbit - author of the script of the movie "Kiborgs", laureates of the Golden Jig "in 2017, as well as Maxim Kurochkin and Professor of Lublin University, Myroslava Oldakovskaya-Kufel, lasted more than three hours. They discussed the details of the writer's biography and the vicissitudes of his life, which will help to enrich and sharpen the plot lines. Professor Aldakovsky-Kufel took scientific care of the work of the group of scriptwriters and agreed to continue to advise the team.

"We sat in a cozy cafe for a cup of green tea and Mrs. Myroslava in a quiet voice, with trepidation and eyes full of enthusiasm began to talk about someone very close and native - about Stasya. The playwrights have said, "Who is Stasya?" It was about Stanislav Vincenz. Indeed, it was strange to listen to the great figure in such a direct, intimate way, but due to this conversation, before our eyes, a living earthly figure with its disadvantages and strangeness arose. Vincenz became closer - such as he was not only on the pages of works, but also in the walls of his own house, and in crisis situations such as imprisonment, death of relatives or divorce from his first wife. I have no doubt that the dramatists will be approaching this outstanding figure to all of us", - said translator and journalist Natalia Petranyuk, who was present during the meeting.

Film "Vincenz" tells about the author of the unique Hutsul epic "On a High Polonyny" Stanislav Vincenz (1888-1971). The fate of Stanislav Vincenz is extremely cinematographic - the grandson of the oil tycoon, the Pole of French descent, the student of Sigmund Freud, he lives on the edge of the world in the Hutsul Hut and reads daily Homer. Vincenz writes his own "Iliad and Odysseus", and then himself, like Odysseus, is forced to flee the Carpathians across the Chornohora mountain range to Hungary, fleeing from Soviet power, accompanied by a molfar. In the last years of his life in Swiss Lausanne, Vincenz rescues the suicide of the Nobel Prize winner, Cheslava Milos, and also takes in the Hutsul Hut in La Combe the brilliant European intellectuals of the twentieth century.

Recall that the idea of creating a scenario of the movie "Vincenz" belongs to the NGO "All-Ukrainian Democratic Forum". The project is implemented with the financial support of the Ukrainian Cultural Foundation. The film should be screened in 2019-2020.