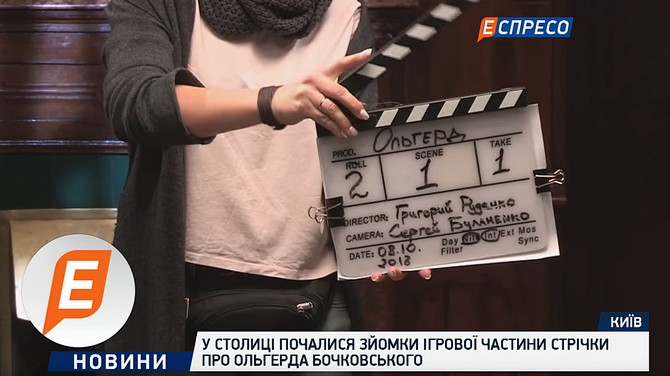 In the capital, shooting of the playing part of the film about Olgerd Bochkovsky began. The project is being implemented by the NGO Demforum  with the support of the Ukrainian Cultural Foundation.

The film will tell about the life of a prominent scientist with Ukrainian roots, who opposed Soviet propaganda and defended the Ukrainian people. This is a documentary film-biography with elements of journalistic investigation.

«Bochkovsky, he warned of Russian invasion. All that he wrote or said on the radio then - it's all right. 100 years have passed, and again we returned where they were ... The purpose - to return the name of the outstanding Ukrainian Olgerd Bochkovsky, which, unfortunately, have forgotten», - said the author of the script and the director Grigory Rudenko.

The film will be of mixed type: there are reconstructions involving professional actors, presenter, archival materials and interviews with experts.

Actor Artem Vilbik, played by Olgerd Bochkovsky, said that when he got acquainted with the script, he felt how the present is intertwined with the past.

«These events are very seriously intertwined with what is happening in Ukraine. They are very resonant. And this, it seems, has become such a push for me to agree and work on this role», - said the actor.

Shooting will continue until the end of October in different regions of Ukraine and in two cities of the Czech Republic. And the premiere show will take place in December on the Espero TV channel.

The project is supported by the Ukrainian Cultural Foundation.