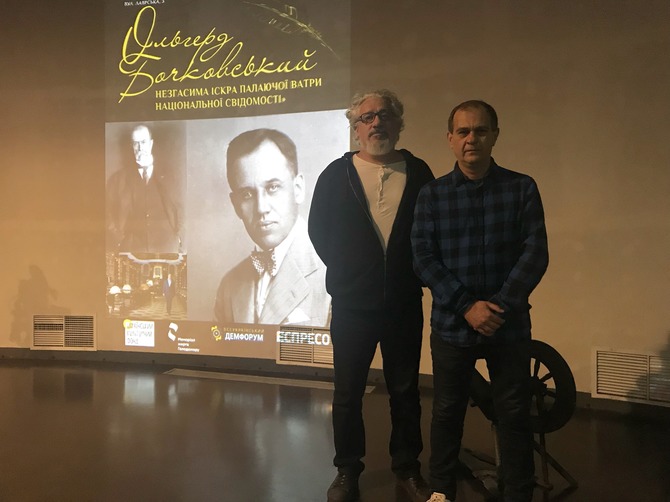 In the National Museum "Holodomor Victims Memorial" a documentary film "Olgerd Bochkovsky. The eternal spark of a burning bonfire of national consciousness" was shown.

As noted by the first deputy general director of the National Museum "Holodomor Victims Memorial" Irina Batyreva, the tape was chosen not by chance. After all, it tells about a prominent sociologist, political scientist and activist of the Ukrainian diaspora. In addition, it has an educational character for the younger generation.

Representatives of the creative group working on the film - scriptwriter and director Grigoriy Rudenko and Artem Bilbek performing the main role, presenting a documentary film, drew the attention of spectators to the allusion that are contained in the film about Olgerd Bochkovsky. Europe, as the creators of the film believe, as it was silent, now and now we must realize responsibility for the future of Ukraine and respect our past, not forgetting about the figures who saw the meaning of life in defending the interests of our country.

Artem Vilbik, an actor and performer of the role of Bochkovsky, noted: "For many years of our independence - and only now has such an active movement, which raises the consciousness of Ukrainians. It helps to identify itself as a nation, as a nation. Bochkovsky's figure is an example of how a person who identifies himself as a Ukrainian should behave."

In the photo: Artist of the role Olgerd Bochkovsky Artem Vilbik and scriptwriter, director Grigoriy Rudenko.