26, April, 2022 brilliant pianist Darius Mazintas’s one-hour performance took place near ruined House of Culture in heroic city Irpin’ to support Ukraine and to honor ruined and heroic city, whose inhabitants paid with own lives to stop Russian attack to capital.

Artist has arrived in Ukraine, spent the night in Irpin’ and played profound Chopin’s nocturnes under open sky in the city, ruined through war to manifest love for Ukraine and deep respect for her defenders and peaceful city and country inhabitants.

Black piano was transported from Kyiv and located on the surviving square’s piece in front of the Central House of Culture in Irpin’. Building is monument of culture, it’s possible to see metal frames of two burnt pianos among the ruined walls.

Irpin’ city mayor Oleksandr Markushyn expressed his thanks to Mr. Mazintas and said, that chosen place possesses symbolic meaning not only as cultural location, but also building from the Irpin’ defense line, which the enemy could not break through thanks to defenders

Darius Mažintas is Vice President and Art Director for EU of the Canadian Foundation “Looking at the Stars”, Lithuanian Academy of Music and Theater absolvent, and a prizewinner of numerous national and international awards. Thanks to his exceptional musical sensitivity and talent, as well as forms of expression and unique interpretations, the pianist is admitted in the Republic of Lithuania and around the world.

"Music that sounds in the halls for pleasure is not all that can be done with it. Music is an energy that helps people… That's the reason why I don't want to play in the halls right now. I want to play in places where it’s unexpectable…. Yes, like today, - said Mr. Mazintas. - That's why we are here symbolically. Our heart is with Ukraine… I love Ukraine. She is fighting not only for herself. She is fighting for the whole world". 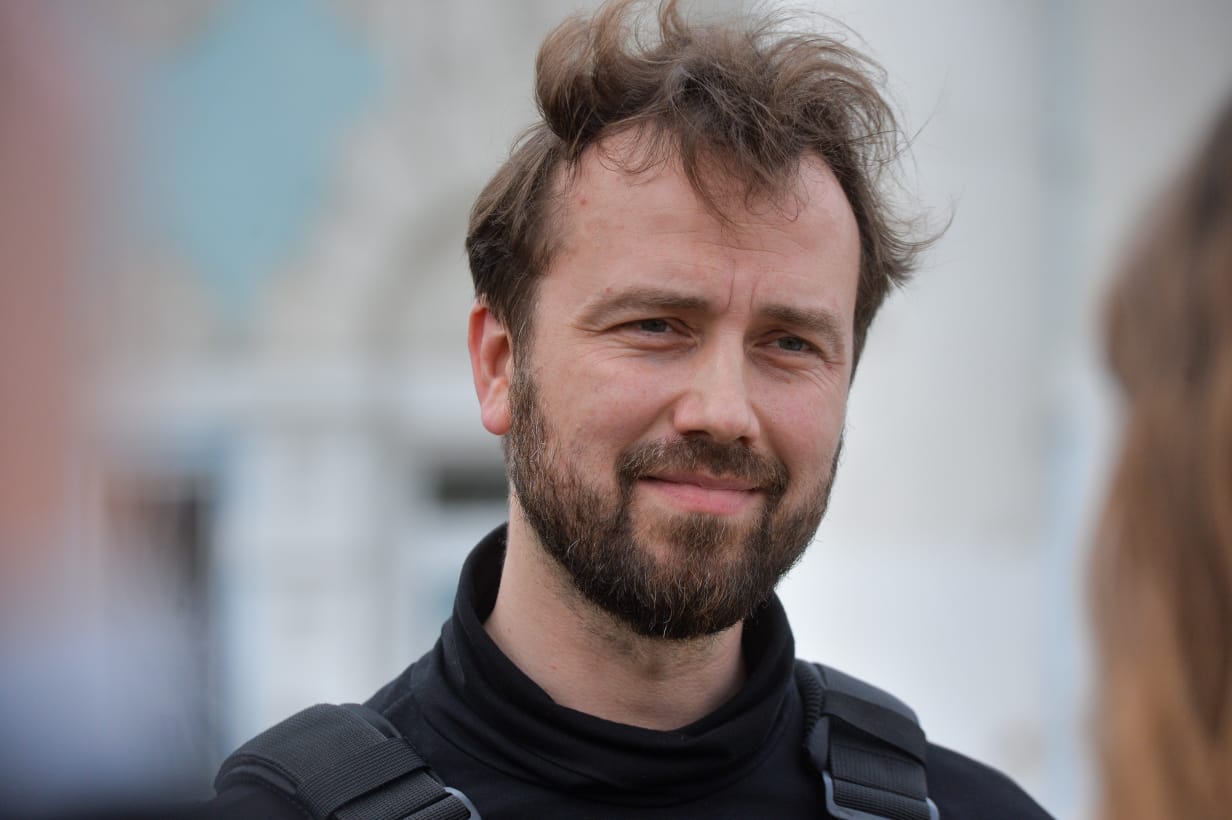 Performance was organized thanks to the Canadian "Looking at the Stars" Foundation’s efforts and with the assistance of NGO “All-Ukraine democratic Forum”, volunteer initiative “People the Army” and Irpin’ city mayor.

“Foundation’s name, “Looking at the Stars” is about a situation, when there's no opportunity to see something, but you look up and see the stars” — Foundation CEO, Margaryta Steinberg explained the main idea for present persons.

Initiative “People the Army” volunteers helped to establish every day comfort and night stay for foreign guests of Irpin’. Here is absent electricity, gas and somewhere, water in the city. People take water from wells and prepare eating on open fires. Building, where musician and his command spent night, suffered from rocket bombings too.

"It is important to draw the attention of the world community to the crimes committed by Russia against Ukraine here, in places like Irpin through inviting people to see with their own eyes the scale of the destruction. After all, it is important to create beauty, to show humanity in painful places”, Yaryna Yasynevych, chairman of the board NGO “All-Ukraine democratic forum”, which has become the project’s partner in Ukraine.

Action was organised to spread information, aimed to draw attention to courage and tragedy of Irpin’, Kyiv region and Ukraine around the world. Mr. Mazintas will play for wounded defenders and Kyiv military hospital personnel.

Photos provided by the Looking at the stars Foundation, photographers Yevhen Kotenko and Volodymyr Panasyuk. 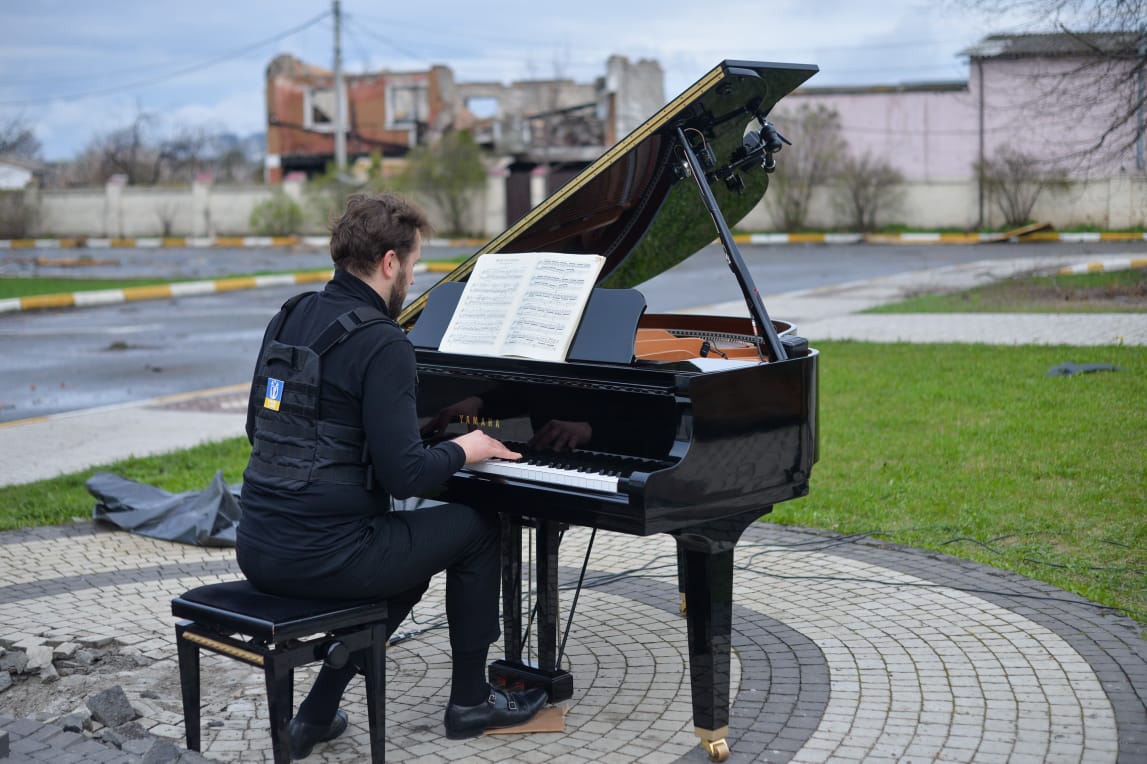 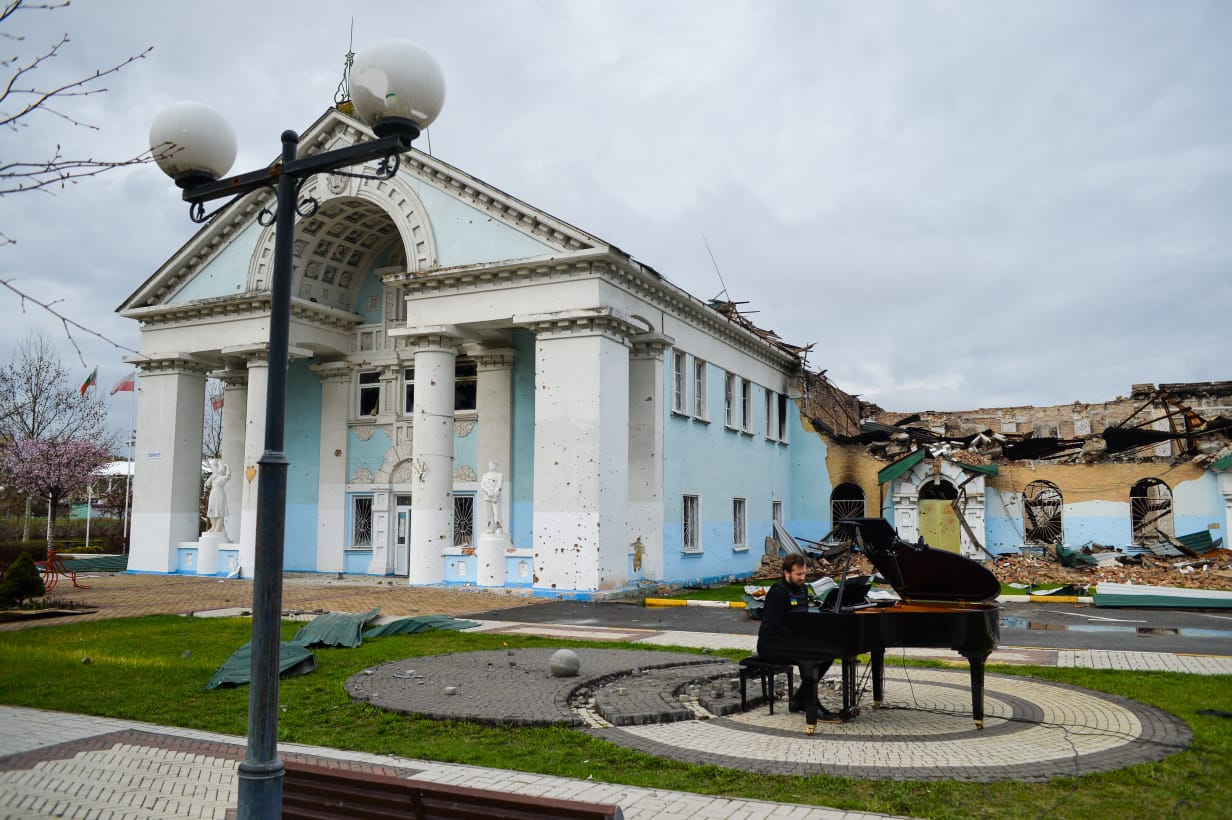