13th, December, 2022, Kremenets mountain in Izium was covered by fog. But even fog couldn’t cover the damages of city and Kypchak babas, caused by Russian aggression and occupants.

Mr. Mažintas is dressing dark festive clothes, a black bullertproof vest with blue-yellow and Canadian flags patches, afford himself gloves only and playing Ukrainian modern classic during near hour among fog and wet im temperature near 5 degrees. He chose, passed through himself and trained these melodies during over month. 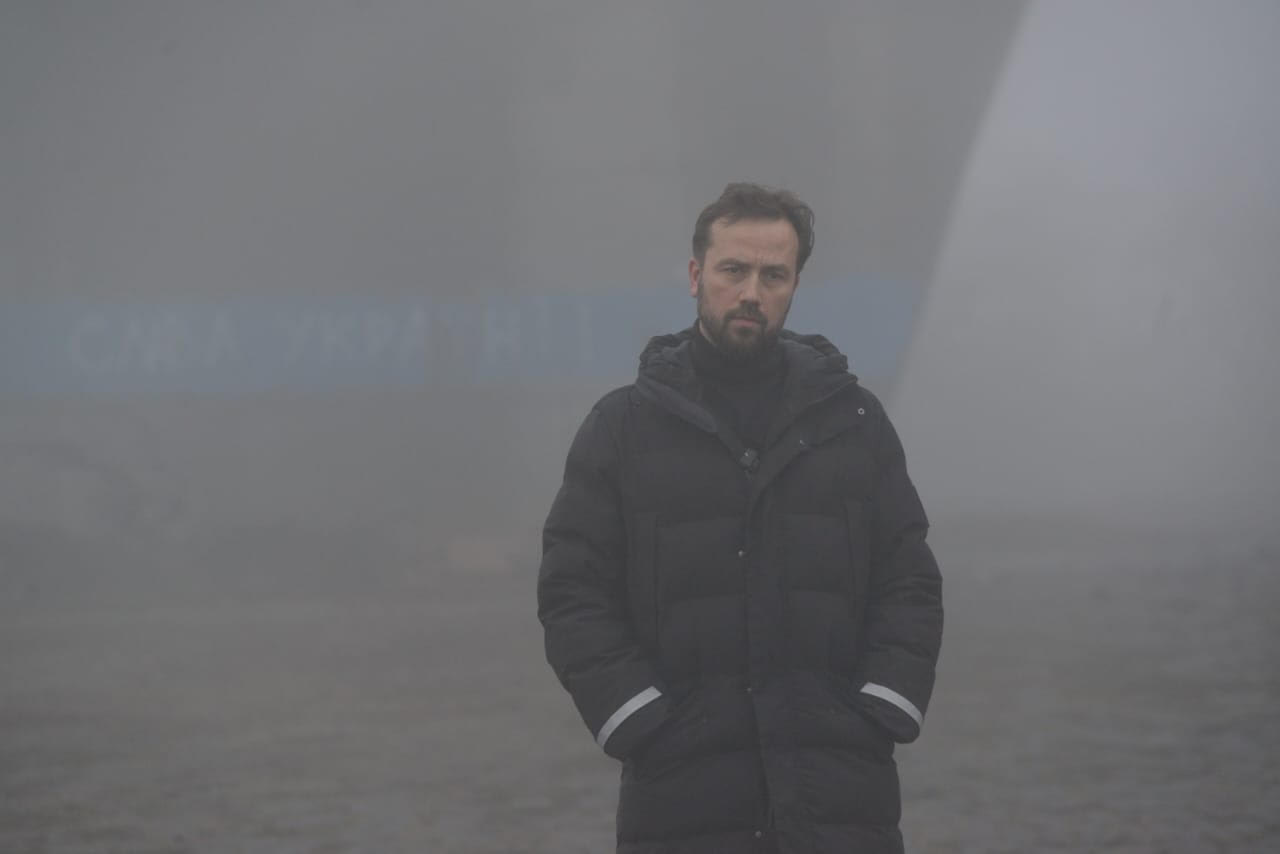 Maestro Mažintas says: “ After war’s beginning, I have became interest more deeply interest with Ukrainian culture and opened Sylvestrov’s music for myself. Whole Ukraine are in this music, its nature and people”. He went to Izium on the day before and spent a night with his team in ancient cellar, which served as shelter for more than 60 persons during military actions and occupation.

Looking at the Stars Foundation, Canadian charitative organisation from Toronto presents classical music through the first class musicians to those, who need it most, but least expect it.

Foundation presented for Ukraine the first classical music concert at 26th, April to the memory of killed in ruined city Irpin’. 13th, December they honoured dead and inspired living in Izium. 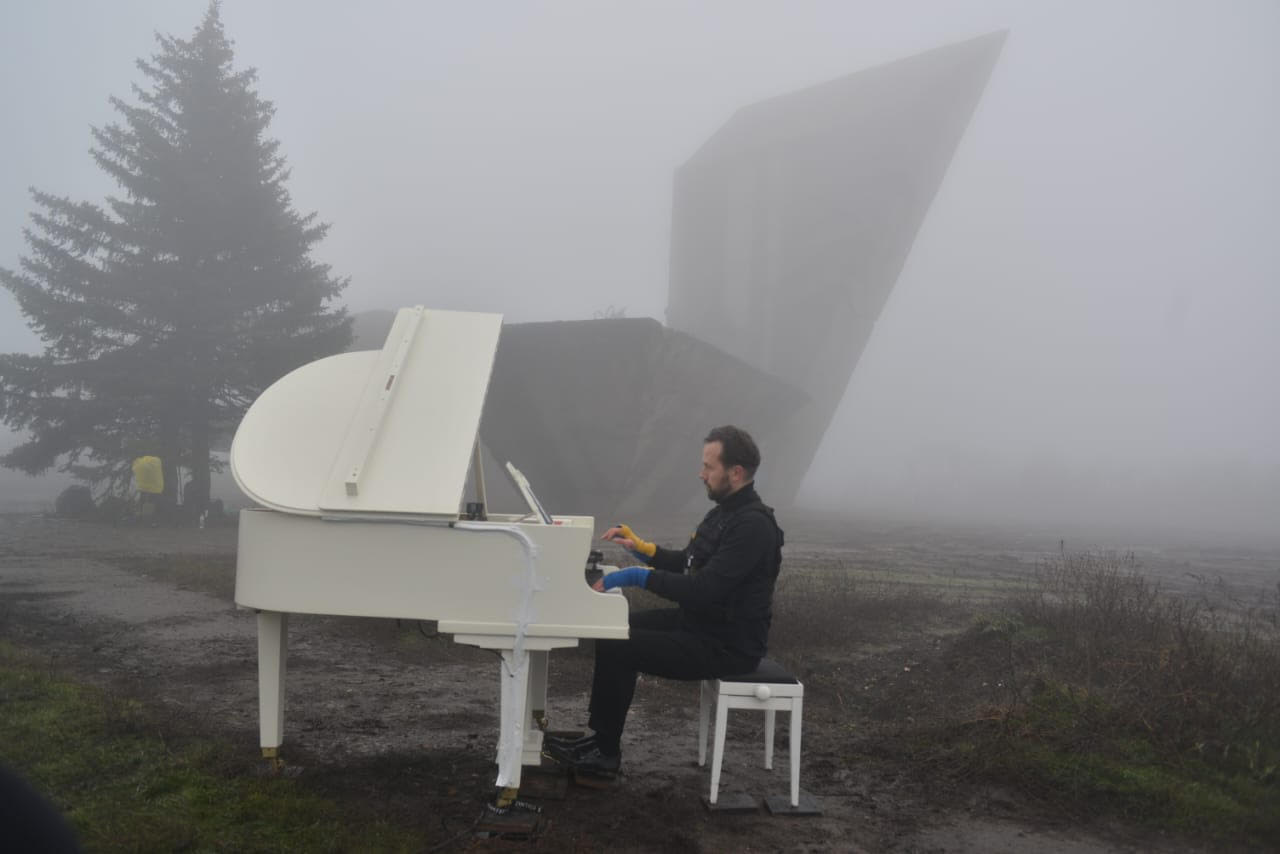 "On behalf of the board of directors, for the second time, it was presented a symbolic gift of classical music - love, respect and admiration to the steadfast and heroic Ukrainian people, who are tirelessly and selflessly fighting the evil Russian aggression. I am sure that classical music. our only weapon, can be as powerful as HIMARS. This will revive the steadfast Ukrainians and destroy the psyche and morale of the aggressor. - Dmitri Kanovich, founder and general director of the Looking at the Stars Foundation, says – We are thankful to Ukraine for every day and minute of our peaceful existence, we have the opportunity to say "thank you" from the bottom of our hearts. Glory to Ukraine and the Ukrainian people!"

“Music cannot level damages, but it health bounds. We attract attention by this action to cultural losses for world cultural ancestry, caused by Russian aggression against Ukraine. We demonstrate such a crushing war is going against Ukrainian people and culture. We use world attention in a global context to go out shadow of Russian culture”, - Yaryna Yasynevych, action co-organisator and director of “Demforum”, says.

Darius Mazintas is expressed by Ukrainian courage and their ability to save humanity and to create goodness in the darkest times even. Volunteeer’s movement is an example of such STIJKIST’.

Sergij Shtan’ko, who left in native city during whole occupation and helped to organise the concert, hopefully says: “ It’s equal important every day help for inhabitants and attention for Izium’s cultural success”.

Performance was organised and finenced by Looking at the Stars Foundation and NGO “All-Ukrainian Democratic Forum”, volunteer organisation “People the Army” and Izium community.

"Looking at the Stars"
Foundation was registered in 2016 as a federal charity and based in Toronto. The organization's mission is to provide world-class classical music to organizations and institutions whose members cannot experience live classical music in a traditional setting, or to those who do not have access to traditional venues.

NGO "All-Ukrainian Democratic Forum"
A public organization that contributes to the comprehensive development of Ukrainian culture, international cooperation in the field of culture and intercultural dialogue, the development of the media environment in Ukraine, the professional skills of journalists, the increase of quality content, the creation of conditions for the satisfaction and protection of legal, social, creative, national-cultural, economic, legal and other interests of its members and society. And during the war, he carries out volunteer and humanitarian initiatives.

Darius Mažintas - Vice President and Artistic Director of the Canadian Foundation "Looking at the Stars" in the European Union. Thanks to his exceptional musical sensibility and talent, as well as charming forms of expression and unique interpretations, Darius Mažintas has already won the recognition of the Republic of Lithuania. A graduate of the Lithuanian Academy of Music and Theater, laureate of numerous national and international music competitions. The list of music festivals in which the pianist participated included Aspen Music Festival, Westchester Piano Festival (USA), Summerakademie (Germany) and Holland Music Session (Netherlands). In 2013-2014, he held the position of Deputy Minister of Culture of the Republic of Lithuania. Mr. Mažintas has given successful concerts in the great halls of the world, such as the Berlin Philharmonic, Carnegie Hall in New York and London's Wigmore Hall. The pianist has recorded several albums, including a solo album in 2011 with works by Bach, Beethoven, and Scriabin. In 2020, Mr. Mažintas joined Looking at the Stars as Vice President and Artistic Director in the European Union and successfully played his first pilot concert in a Lithuanian prison